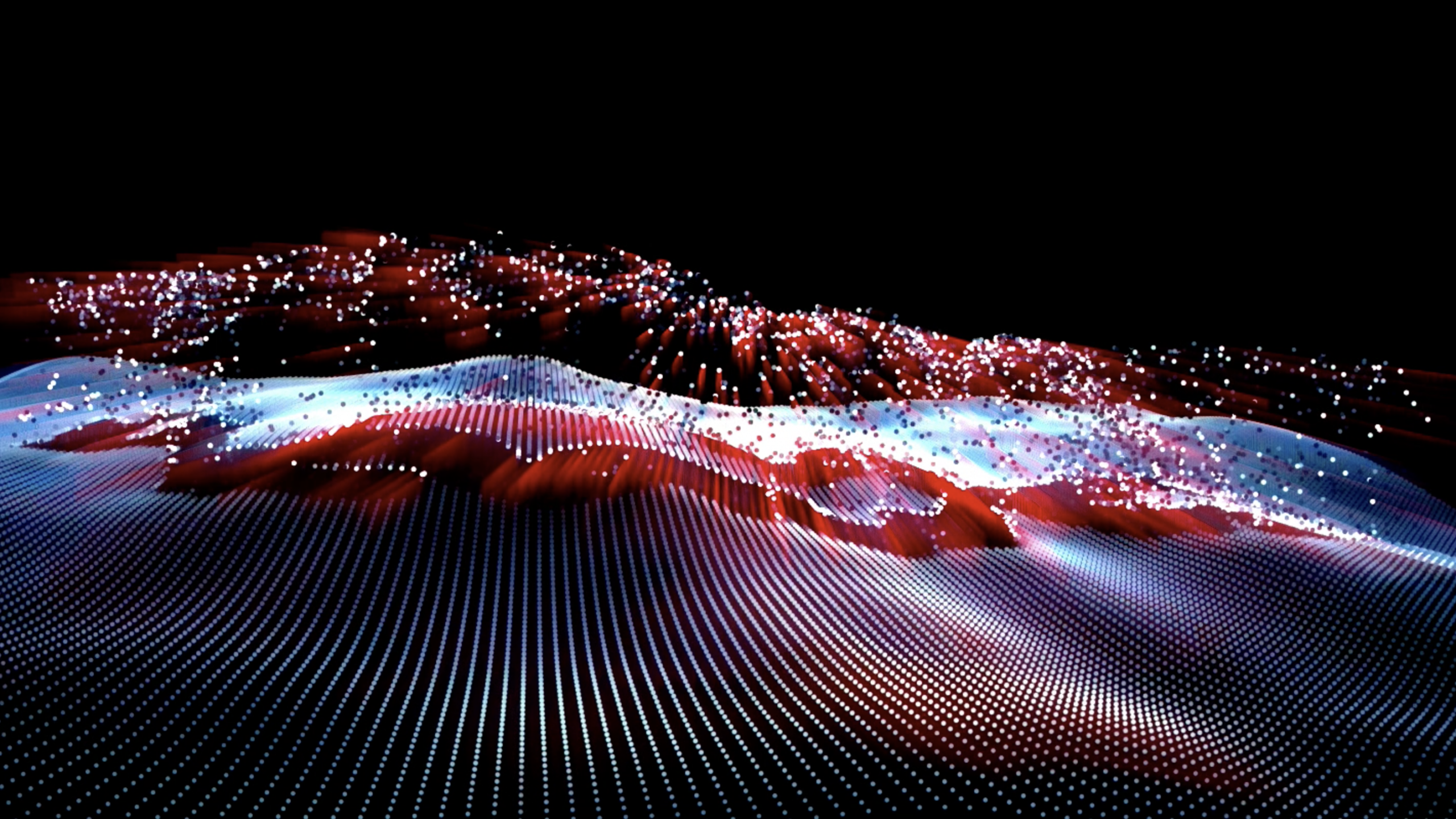 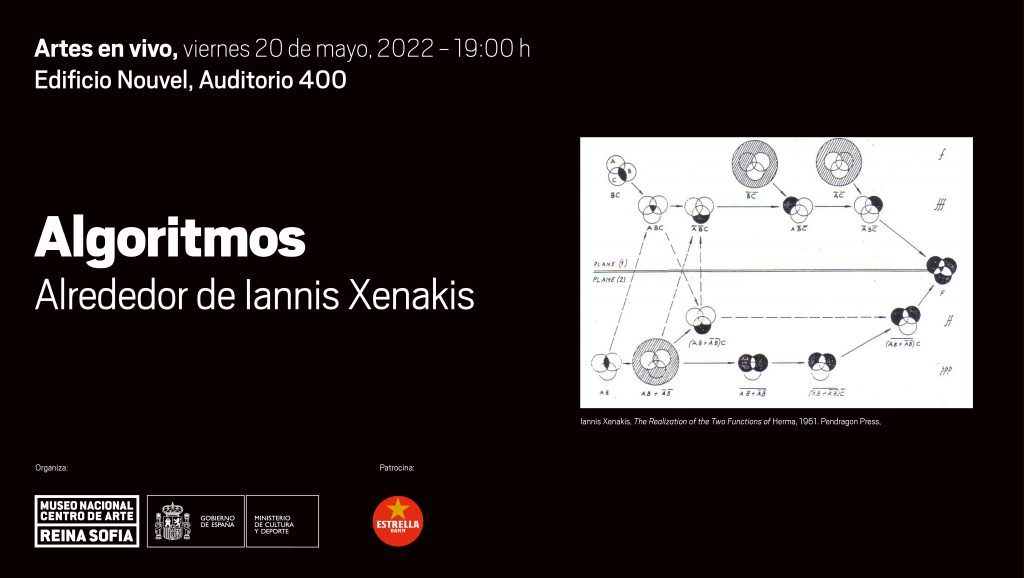 Algorithms is an evening of music based on a set of mathematical instructions describing the homonym concept. On this occasion, the Museo Reina Sofía offers a session of guided listening with two pieces for piano by Iannis Xenakis: Herma (1961) and Evryali (1973), performed by Magdalena Cerezo Falces. To make Xenakis’s method of mathematical composition legible, the performer is joined by musicologist and educator Marina Hervás and artist Marta Verdem, whose visuals are designed specifically for the event. This will be followed by Xenakis’s piece La légende d’eer (1977-1978) performed by musician Sergio Luque, with the collaboration of Juan Carlos Blancas. Musician and architect Iannis Xenakis was born in 1922 at the heart of the Greek community of Brăila, in Romania, his compositions doing justice to Greek mathematical, harmonic and architectural tradition. Xenakis, one of the foremost figures of twentieth-century music, is known for his definition of stochastic music, his forays into algorithmic music and his model of architectural-musical composition via Polytopes.

The aim of the evening is to critically contextualise the figure of this musician in relation to other models of non-European mathematical music and to analyse the implications in the current use of computer algorithms by music streaming platforms.

Juan Carlos Blancas is a sound designer, musician and teacher. He has broad experience in creating sound spaces for audiovisual, literary and stage art projects and specialises in producing field recordings, in addition to the digital transformation and processing of this material via programming environments. Under the alias Coeval he has made music since the 1990s that has been released and disseminated in different experimental audio formats and contexts, mainly in Spain and Europe. He is a founding member of the CRC Cultural Association of Digital Art and is a contributor to different training programmes in the Katarina Gurska Advanced School of Music in Madrid and the Community of Madrid’s ECAM School of Cinematography and Audiovisuals.

Magdalena Cerezo is a pianist and performer specialised in contemporary music. She is the founder of the ensembles LAB51 and f:t, and an honorary member of the Junge Deutsche Philharmonie and a pianist in the Arxis Ensemble. Across her career, she has played in spaces that include Madrid’s National Auditorium, Kölner Philharmonie in Cologne, Berliner Philharmonie, Staatsoper Stuttgart and the Centre Pompidou in Paris, and has performed at festivals such as Darmstädter Ferienkurse and Donaueschinger Musiktage in Germany, ManiFeste in France, and RESIS in Spain. Moreover, she has worked with composers like Beat Furrer, Helmut Lachenmann, Bernhard Lang and Rebecca Saunders and has premiered the works of Ablinger, Sara Glojnarić and Fabián Panisello.

Marina Hervás holds a PhD in philosophy from the Autonomous University of Barcelona, a degree in Philosophy and an MA in Art Theory and Cultural Management from the La Laguna University, and a degree in Music History and Science from the University of La Rioja. She has held pre- and post-doctoral residencies at the Institute of Social Research from the University of Frankfurt and the Arts Academy in Berlin. She is the author of La escucha del ojo. Un recorrido por el sonido y el cine (Exit, 2022) and joint editor, with Pedro Alcalde, of Terremotos musicales. Denarraciones de la música en el siglo XXI (Antoni Bosch, 2020). She is currently an assistant PhD lecturer in the Department of Music History and Science at the University of Granada.

Jesús Jara is a musician, researcher and teacher. After studying Teaching and Computer Engineering at the Complutense University of Madrid, from 2011 to 2015, he studied technology and music in Germany. Since 2015, he has worked in Medialab Prado Madrid, where he approaches sound creation and education through live coding. He has participated in festivals of digital creation such as Festival EXPLORA (Bilbao), In-Sonora (Madrid), Transmediale (Berlin) and AlgoMech (UK), and organised the Fourth International Conference of Live Coding in Medialab Prado (Madrid, 2019). He currently teaches at the María Dolores Pradera Municipal School of Music and Dance in Madrid and is a co-founder of the Electrosound School.

Sergio Luque is a composer of vocal, instrumental and electroacoustic music and researches computer-made music. He holds a PhD in Composition from Birmingham University and post-graduate studies in Sonology, with an honourable mention, from the Royal Conservatoire of the Hague and in Composition from the Rotterdam Conservatory. He co-directs the MA in Electroacoustic Composition and New Media at the Katarina Gurska Advanced School of Music in Madrid. He is also a guest lecturer at the Royal Conservatoire of the Hague and a member of the Birmingham Electroacoustic Sound Theatre (BEAST). Furthermore, he has been a member of the National System of Art Creators in Mexico, and his music has been performed by the Birmingham Contemporary Music Group, the Nieuw Ensemble, the Schönberg Ensemble and Garth Knox, among others.

Marta Verde Baqueiro is a visual artist, digital creator and teacher. Her artistic practice explores indeterministic nature in the relationship between the organic and the electronic in the visible field through the use of noise, repetition and the digital processing of analogue images in real time. Her work materialises through multimedia and light installations and in collaborations with musicians and dancers as she applies the development of her own software and the construction of new devices through digital and/or electronic production. Currently, she is an associate professor at Berklee College of Music (Valencia Campus). 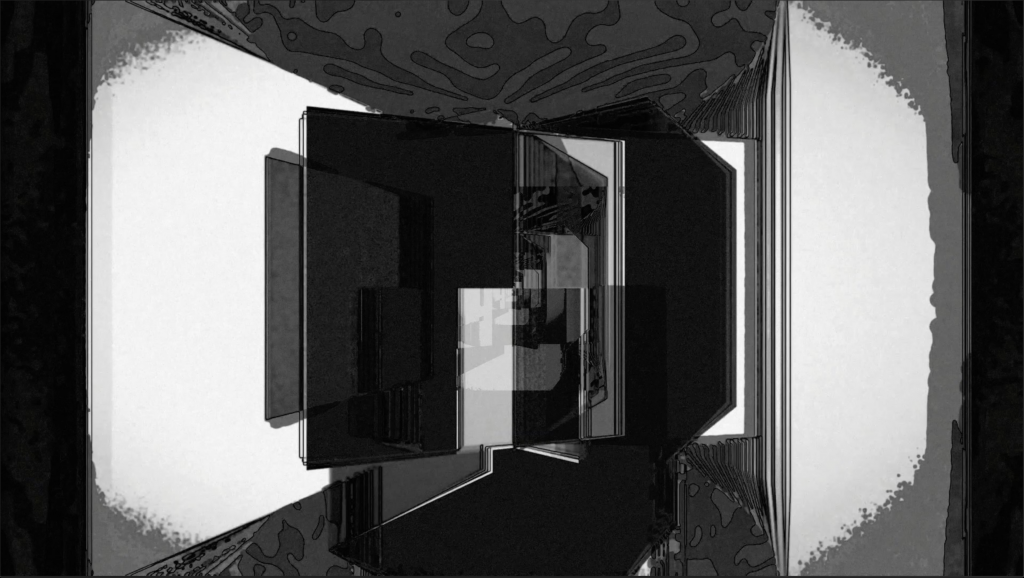